Raleigh | W. Dallas Herring, the scholarly businessman who led the state school board for two decades and is credited as the father of the state's community college system, died Friday at Pender Memorial Hospital.

He was 90. The cause was complications from kidney failure, said Robert Herring, his brother.

Dallas Herring, while not a professional educator, was long an elder statesman of North Carolina public education and was prominent in statewide and local efforts to improve schools, establish post-high school educational opportunities and preserve local and family history.

But his greatest achievement was the creation of a system of industrial schools that would grow into the N.C. Community College System.

"Dallas Herring was a marvelous example of selfless public service, in the best sense of the word," said former Gov. Jim Holshouser. "There is no question of his place in history as the father of the North Carolina Community College System. While many were involved in the development of community colleges in the state, no one had more impact than Dallas Herring."

In the 1950s, state leaders felt a need for education beyond high school, according to a biography of Herring prepared by the community college system.

When Herring joined the N.C. State Board of Education in 1957, Gov. Luther Hodges asked him to develop a plan.

By 1961, there were five colleges and seven industrial education centers.

The need to coordinate the two systems was apparent to Herring and then-Gov. Terry Sanford, who succeeded in persuading lawmakers to establish the unified N.C. Community College System in 1963.

The system grew quickly. By 1966, there were 43 institutions and 28,250 students. Three years later, 54 community colleges were educating nearly 60,000 students.

Today, there are 58 campuses, including institutions in New Hanover, Brunswick, Columbus and Duplin counties. Last year, those schools served 779,228 students.

The system has been credited with improving educational opportunity in the state and aiding in North Carolina's fast industrial and commercial growth in the past four decades by providing a trained work force.

Others said that his vision of an educational system rooted in the community and open to all influenced two generations of North Carolina educators.

"Dr. Dallas Herring is probably the person I quote most frequently because he was such a visionary. His philosophy has undergirded the community colleges in North Carolina since their inception," said system President Martin Lancaster. "North Carolina would not have a community college system - certainly it would not have one that embraces all the good things higher education represents - if not for Dr. Herring."

State Sen. Charlie Albertson, D-Duplin, said Herring's vision was particularly progressive, coming as it did during the desegregation struggles of the 1950s, '60s and '70s.

"It was because of people like him that we were able to move through that period and move forward as a state," Albertson said. "He was someone who cared deeply about the worth and dignity of the common man."

Herring was born in 1916 in Rose Hill, a Duplin County town about 45 miles north of Wilmington. He graduated from Rose Hill High in 1933 and with honors in 1938 from Davidson College, where he studied English and economics. He was a member of Phi Beta Kappa.

After graduation, he went to work for the family business, Atlantic Coffin and Casket Co.

In 1939, the residents of Rose Hill made him one of the youngest town mayors in the nation. He held the job until 1951, when he joined the Duplin County school board.

Near the end of his tenure, he met a new board member - the state's young lieutenant governor, Jim Hunt.

"He was a very determined person who was not afraid to take on one and all when it came to establishing and improving schools," said Hunt, who became the state's longest-serving governor and a national leader in education policy. "He was a bulldog when it came to providing for the schools."

After his time in Raleigh, he continued as president of the family business. Education leaders would make the trek to Rose Hill for consultations. He put his energies toward improvements at James Sprunt Community College in Duplin County, where he was a trustee between 1971 and 1986.

In 2003, on the 40th anniversary of the community college system, system leaders held a testimonial dinner for him and gave his name to the system's leadership development institute. He was granted four honorary doctorates in recognition of his leadership in education policy.

At home, he pursued his passionate interests in local history and genealogy.

He typically opened the library, which is now the headquarters of the Duplin County Historical Society Foundation, to visitors between noon and midnight.

"It is the happy hunting ground for genealogists," said Bill Holt, a Wilmington retiree who struck up a friendship with Herring five years ago when his wife decided to research the family tree.

Herring, a lifelong bachelor, is survived by two brothers and a sister.

This photo provided by Billie Powell 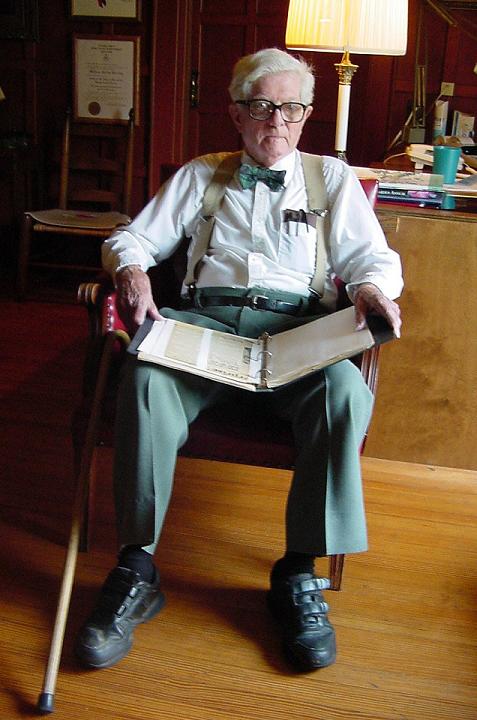